Floods for small streams are often estimated using rational formula assumptions: a 100-year flood is found by finding a time-of-concentration, a 100-yr rainfall intensity for the time of concentration, and a runoff coefficient. 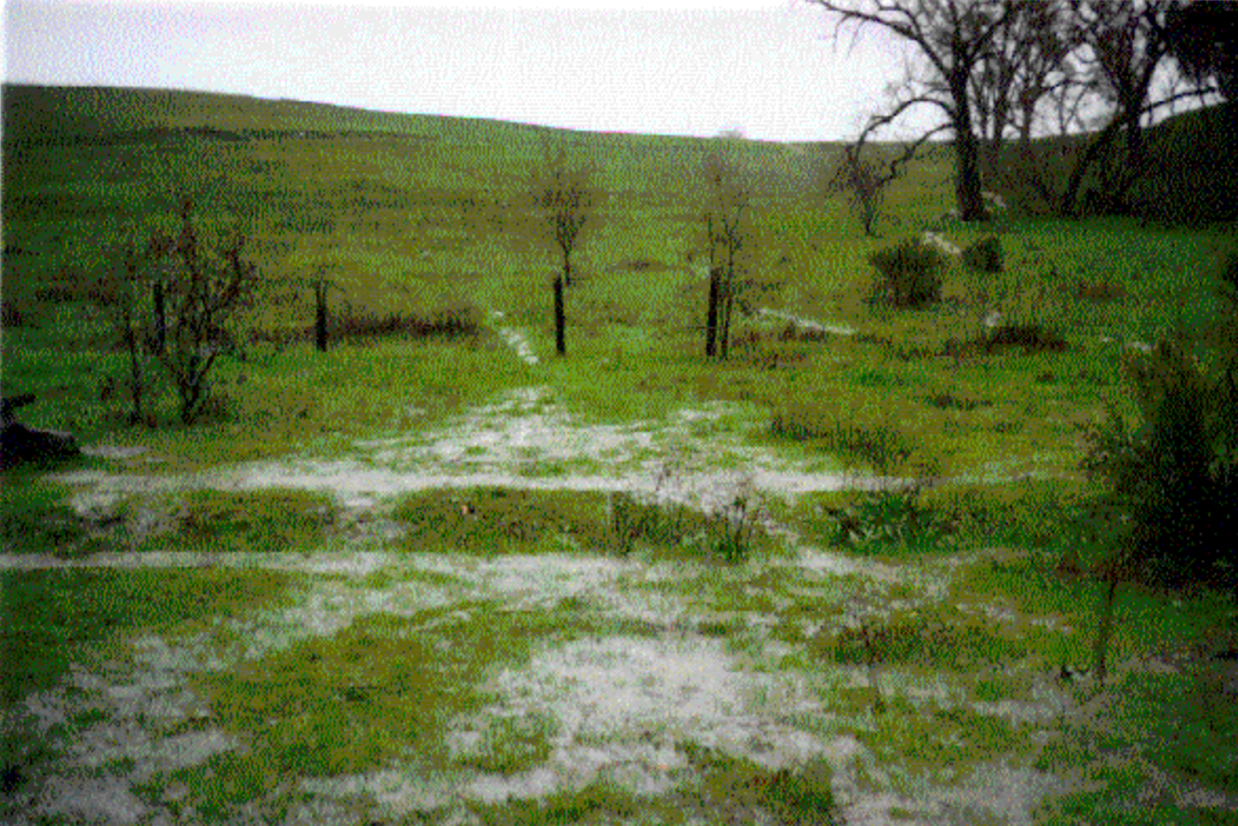 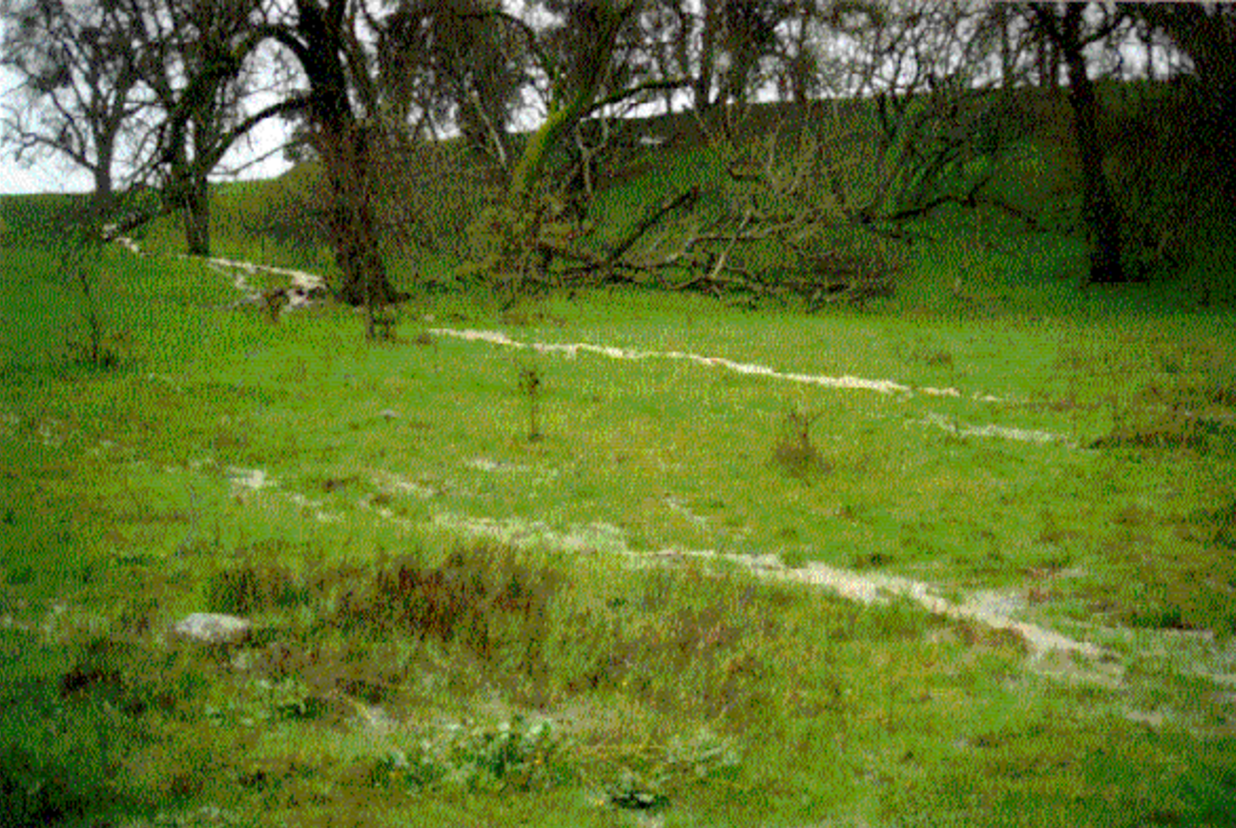 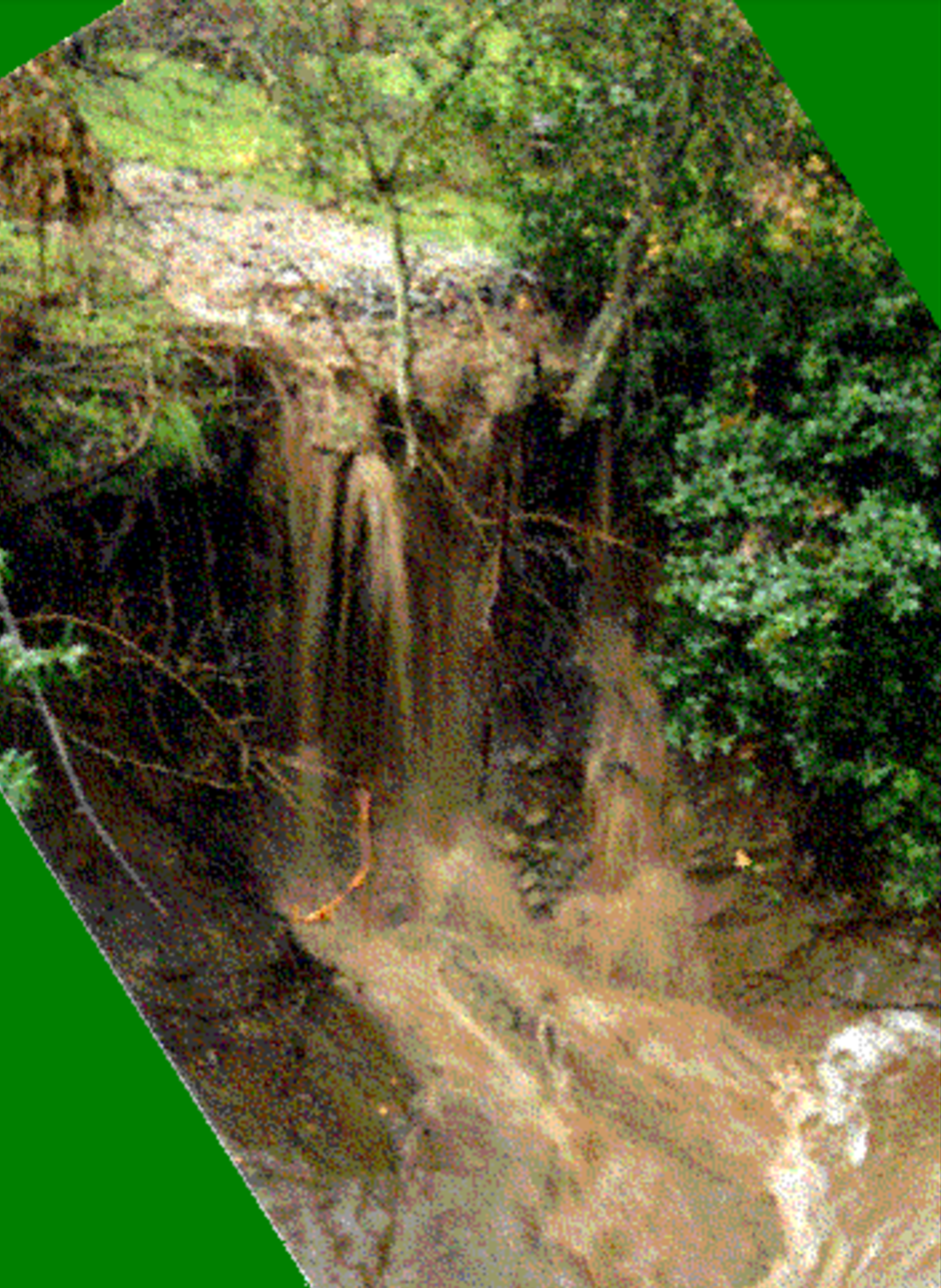 What does happen in rare floods?

Rare floods, including “100-yr” floods, are often caused by the combination of infrequent high watershed moisture conditions and heavy but not extraordinary precipitation intensities. The high watershed soil moisture conditions are caused by higher than average seasonal precipitation or are due to a series of storms prior to the storm that causes the rare flood. High watershed soil moistures may develop over a period of several months.

There was no flow in these channels for five consecutive years in the 1980’s, and the gullies in Photo 1 during these dry years seemed to be ancient artifacts.

The land and channels in Photos 1 to 4 are in the San Francisquito Creek watershed. On Tuesday, February 3rd, 1998 a moderately heavy rainfall in the watershed caused the creek to flood for the first time since 1956. The wet watershed lands prior to this storm were very unusual, so the conditional or short-term flood frequency for the watershed was high by the end of January. The February 2nd/3rd storm was large but was not extraordinary.

Hydrologists and engineers in the 1930’s and 40’s were acutely aware of the role of watershed lands during floods. Writing in 1944, W. W. Horner states:

It is necessary to recognize that ‘outstanding flood periods’ are the result not only of great storms, but of the coincidence of great storms, and sometimes lesser storms, with the occurrence of either low infiltration capacity or small usable (soil moisture) storage condition.

Studies restricted to ‘major flood periods’ disregard the potential flood-producing storms that have not produced major floods. Only by studying the mechanics of runoff at all flood levels . . . . can the hydrologist begin to isolate the controlling factors and their quantitative ranges.

Discussion of this paper by L. K. Sherman (who first suggested the unit-hydrograph in 1932) and by Hoyt and Langbein, Waldo Smith, and others supported Horner’s conclusions about the importance of the land and advanced some alternate methods for handling hydrologic processes on the land. Horner’s work shows that considerable activity was underway in the 1930’s and 40’s in data collection and the analysis to better understand hydrologic processes.

Understanding processes continue to be important. What is the relationship between rainfall frequency and runoff frequency during floods?

The data in Figure 1 are from a paper by Laura Marino and A. Allen Bradley (Precipitation Frequency – Runoff Frequency Relationship in Hydrologic Design, paper presented at the 1986 AGU Fall Annual Meeting – San Francisco). The data are for Arroyo Del Hambre near Martinez, California (15.1 sq. mi, mean annual rainfall 22 inches). The precipitation data were collected over 41 years: 1945 to 1986.

Rainfall intensity-frequency data for a one hour duration for Arroyo Del Hambre are:

A rainfall of 0.8 in/hr caused the highest Arroyo Del Hambre runoff of 0.61 in/hr.

A 0.8 in/hr rainfall has a return period of approximately 15 yrs.

The highest rainfall of 1.3 in/hr, with a return period of 200 yrs. produced no significant runoff.

Six other rainfalls with return periods between five and ten years produced zero or no significant runoff.

At all runoff return periods, the return period of the rainfall that causes peak runoff is typically much more frequent.

One hour rainfalls are relevant for Arroyo Del Hambre since the watershed is relatively small and steep.

Figure 2 shows the runoff hydrographs from a storm in Lichau Creek, Ca (8.23 sq. mi.) when initial conditions in the watershed are at historic high and historic low soil moistures for the date of the storm: January 3rd and 4th. Precipitation in this storm was 7.5 inches in the Lichau watershed in 24-hrs, from 3 pm January 3rd to 2 pm January 4th, 1982. The 100-yr 24-hour rainfall in the watershed is 6.2 inches.

Experience reviewing hydrologic design “failures,” sometimes in legal cases, indicates that designers take risks when they over-simplify hydrologic processes. Flood control storages based on a design event that fails in a series of lesser storms are a good example.

Flood frequency including the 100-yr or 1% flood in a watershed is time variable. Flood frequency variability in time is due to the seasonal progression in climate and watershed conditions and is due to differences in watershed soil moistures at any time during a season.

Will a stream flood? and What is the current risk of a flood?

The types of information typically available are:

Figure 3 shows the conditional flood frequency for Lichau Creek, CA for January when the watershed soil moistures on January 1st are at historical maximum and historical minimum levels.

The conditional or near term flood frequency on January 1st, 1998 in Lichau Creek would have approached the historical maximum. High streamflows on February 2nd, 3rd, and 4th, 1998, in Lichau Creek contributed to downstream flooding in the Petaluma River Valley.

Floods often seem to surprise floodplain residents and public safety officials despite the broad availability of flood maps and flood watch and warning broadcasts. This may be inevitable where a flood occurs only once in a generation. Nonetheless, appreciation of flood risk variability within different years is useful.

The statement that a 100-yr flood in a stream has a 1% chance of occurring in any year is true only when the “year” is an undefined future year.

What is the chance that the long-term mean 100-yr flood will happen within the next month?

For Lichau Creek in Figure 3, this answer ranges from about 3% to a very low level – perhaps 0.1% or less.

Modeling three hydrologic flow paths is fictional. The actual number of flow paths that will exist in a watershed is unlimited. The three flow paths are a convenience for modeling that allows a small number of parameters to represent continuously varying processes.

HFAM model parameters control how the hydrologic processes operate. The effect or importance of any given parameter or process will vary from one watershed to another.