(Text of a talk given by Norman H. Crawford at the International Workshop on Sustainable Riverine Fish Habitat, the Empress Hotel, Victoria, B. C. April 21, 1999. The Workshop was organized by Charles Howard and Associates, Victoria, B. C.)

Our Fish Story is this: A watershed has a water supply reservoir upstream that is operated ‘fill and spill.’ Precipitation is seasonal and minimum streamflows occur in the summer. A minimum instream flow is released for fish in the summer and fall. In the current

A minimum instream flow is released for fish in the summer and fall. In the current year, the winter rains begin early and are plentiful filling the reservoir just as the spawning season ends. Spill at the reservoir creates high flows and scours eggs from the streambed gravel {see Figure 6, minimum flow hydrograph}.

I am following three different threads today with the hope that they will merge by the end of this talk.

First, in the 1960’s at UC Berkeley, Prof. Zadeh, who was the Head of the EE Department at that time began experimenting with fuzzy sets for systems analysis and control.

Fuzzy sets are discussed by Dr. Zadeh in the paper “Outline of a New Approach to the Analysis of Complex Systems and Decision Processes”, IEEE Transactions on Systems, Man and Cybernetics, SMC-3(1), January 1973.

The second thread is the following:

In this morning’s session, Mike Sale showed a figure similar to Figure 2: Figure 2 sketches the ‘total benefit’ to fisheries of flow in a reach of a river on a given date. The benefit begins at zero and increases to a maximum and then decreases as increasing streamflows create turbidity or scour streambeds.

Total benefit lines for fisheries are logically continuous and are more similar to Zadeh’s fuzzy set functions than they are to on-off switches.

Is it rational to operate a reservoir using long term statistical characteristics — ignoring the present reality?

Why should we not use our current data on watershed state and “Hold to the now, the here, through which all future plunges into the past.” – James Joyce, Ulysses.

We can now attempt a synthesis, combining all of the threads of the Fish Story. We will create total value plots, like Figure 2, for all of the releases from the reservoir, for example, for municipal water supplies, irrigation, recreation, etc.All of these plots including fisheries are created for every day in the future over the next several months or years. These reservoir release values and the conditional plots of future

All of these plots including fisheries are created for every day, in the future, over the next several months, or years. These reservoir release values and the conditional plots of future stream flows at ‘now’ can be combined to find the current optimal reservoir release — the release that creates the highest values for reservoir releases considering all purposes.

The result is sketched in Figure 5. The entire analysis is dynamic — future stream flows change as weather occurs, and future marginal values for reservoir releases change as circumstances in the watershed change. The analysis is repeated continuously.

Would the analysis above be ‘better’ than having set instream flows? What is gained, and what is given up?

Fisheries would get a dynamic share of the water resource: As water supplies increase (Figure 5) all of the beneficial releases from the reservoir increase — fish would no longer exist on a ‘minimum flow’ independent of water supplies.

Release of water for different purposes are determined from the future marginal benefit curves and from future streamflow probabilities. The unrealistic proposition that an on-off switch determines the health of fisheries is moot.

All users of water would lose actual or imagined assurance of being ‘first among equals.’

Water wars would be based on marginal value curves. Water users would enter Huxley’s “Brave New World”. No change of this import would be easy, but non-optimal operations at reservoirs do have consequences. As Huxley once said, “Facts do not cease to exist because they are ignored.”

Finally, how would the reservoir in the Fish Story that began this talk operate if the optimization analysis in Figure 5 were used?

The original reservoir operation (in red in Figure 6), a fixed minimum flow release until the reservoir fills, is sketched as the minimum flow hydrograph.

When the reservoir is operated optimally the dynamic operation hydrograph shows that:

In the dynamic operation, hydrograph damaging high flows are avoided and the eggs and fry are saved. Fish Stories are heroic. Some are true.

Fish Stories are heroic. Some are true.

Chuck Howard, in a discussion about reservoirs, said: “The purpose of releases for fisheries must be to grow fish.”

Dynamic reservoir operation is a tool that could contribute to this purpose. 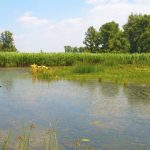